These Were the Voyages, pt. 10: Peter David 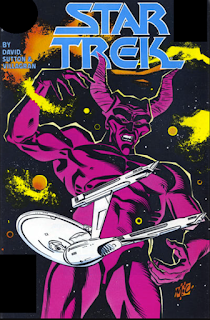 Goodness, this is the penultimate post in our series! That went relatively quickly. And DC's Trek, v1 wraps up with a stint of issues by Peter David.

You know that scene in Casino where Sam tells Nicky, hey, you don't want them (the feds) to write your name in their book because they only have two names in that book and the other one is Al Capone? This has always reminded me of the list of "favorite writers" I kept on the inside cover of an 8th grade notebook. That list was Stephen King and Peter David (on account of his then-stint on Hulk). It's actually surprising to discover I've never blogged up David's Hulk (especially considering I spent so much time with later and earlier eras of the character) since it's in that Goldilocks Zone of blogging/personal preoccupations i.e. things I loved between the ages of ten and sixteen.

David only stayed at the top for a year or two as I moved on to other things, but for awhile he was in there with Al Capone. These issues are only the beginning of PAD (as he's known these days - here's his Patreon)'s long association with Star Trek. He wrote some of the earliest TNG novels, one of which was given to me as a Christmas present and confused me for years by spelling DATA in all-caps everywhere it appeared. I asked him about this on Twitter ten years ago or so and he replied that it must have been the style book at the time but agreed it was tough to read over and over again.

The difference in character dynamics, dialogue, structure, detail, and overall Trekkiness between these issues and the ones coming before them is profound. It's unfortunate the series didn't have him from the beginning. Fifty-plus issues of David, Sutton, and Villagran would have been wonderful. Let's dive in. 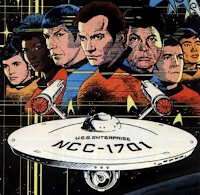 48. The crew throws Konom a bachelor party. Kirk says no booze, but Chekov, Bones, and Scotty spike the ritualistic punch bowl. Captain Kirk is hit in the head with a bottle, and Sulu hooks up with M’ress. 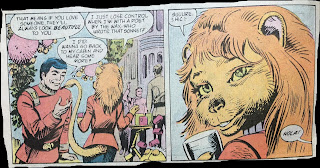 Meanwhile, a renegade Federation vessel destroys a Klingon science colony, leaving only one survivor. More on him next time.

David achieves his first miracle is getting me to care about Konom, Bryce, and all the rest. Pursuant to my theory of why they killed off the much more interesting Surak crew while keeping these losers around, it's because two of them you can put into skimpy outfits. Well, technically, you could put all of them into skimpy outfits. I'm just trying to think like a publisher of yesteryear. That's Bryce as the "girl in the cake," which Konom instantly groks. 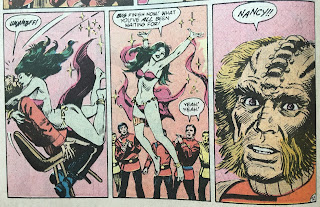 I believe the trope of the bride-to-be popping out of the wedding cake at the bachelor party usually spells doom. I can't remember if that's the case in Bachelor Party, despite watching it maybe two or three years ago. There's a Cheers episode where Diane is persuaded to jump out of the wedding cake at Sam's bachelor party and anyone of a certain age knows how that went. But I feel like in the space since I read this issue and when I am typing these words (perhaps a month) I saw something somewhere that broke the trend and I meant to mention it here. I have zero recall of what it was alas, but perhaps the trope is not as predisposed to break in only the one direction as I imagine.

Will it be bad joss for Konom and Bryce? We shall see. For any who ask why or how this sexist ritual persists to the twenty-third century:

49. The Enterprise investigates the destruction of the Klingon base and take aboard the sole survivor: “Moron,” a half-human, half-Klingon space urchin, untouchable in Klingon caste, interplanetary breeding akin more or less to bestiality. The crews scuffle briefly, long enough for Kirk to realize they have some unexplained, superior weaponry when they make their escape.

First off, did I hear that right?

The Bryce/Konom/Moron family unit is cute, and cutely explored. The big thing that happens this issue is Kirk tells Bearclaw he's had enough and he's transferred. He'd hoped he's grow into the role, but he was wrong and his mind is made up.

The bad news is: he doesn't leave. It's good to see Kirk telling him what the rest of us outside the comic want to hear. But somewhat diminished by knowing he'll be here through the damn end of the series. Silver lining: it doesn't look like anyone did anything with the character after v1 ended. It's barely enough to cover the tab, but at least he goes out on a somewhat redemptive note (as we see in subsequent issues.)

Kirk is ordered to work with the Klingons to bring the renegade ship to heel. Kirk sends one team to Omicron Cetti IV to follow some clues, where they find the dead body of Captain Zair, aka the renegade Captain. Who, then, is out in space, raiding colonies? And who is his mysterious benefactor, arming him with futuristic tech? Neither mystery is solved, but the crew and ship are captured, even though Zair escapes.

"Moron" and the entire issue of half-Klingon/half-human offspring issue causes issues for Konom and Nancy’s wedding. (Do the Anniversary Issue meta-gaming: will it end with a wedding… or death?) 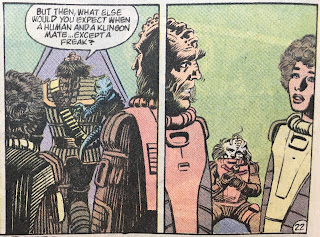 Obviously from the very first, Trek explored the implications of such things. "Half-breeds" have a colorful history in the world, but it is solely through the lens of late-20th-century black/white, or perhaps interfaith, couplings that we view things here. David handles it all pretty well. At the time of this writing I don't think there was any precedent for Klingon/human hybrids of any kind.

51. and 52. The Enterprise goes to Hell – Dante’s Inferno, specifically. Courtesy of Lt. Castille, a telepath suffering from LeGuin’s Disease, a rare disease causing him to warp everyone’s reality to smithereens. Konom and Bryce enjoy their honeymoon. 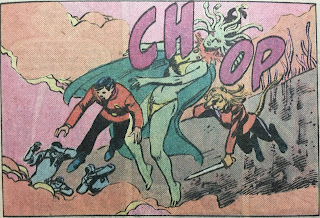 53. At the end of the last issue, Bearclaw (or was it really him?) stabs Captain Kirk. This is the post-stabbing episode where his soul and mind wander while his body wavers between life and death. 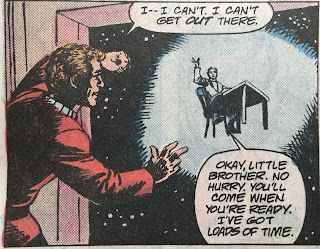 My original summary referred to it as an 80s-tv-trope, but I don’t think that’s quite accurate. That’s just where I came across it first. (St. Elsewhere, Magnum PI, elsewhere. There's a memorable BSG episode more recently where it happens to Roslin.) It’s the sort of thing you’ve seen in a lot of places across a lot of mediums, the friends gathered round the body in Sick Bay or wherever, directly addressing the comatose body, arguing with each other, sleepless nights looking for a cure, etc. And it’s used effectively here.
Actually, I guess we say pretty definitively now unless there's some complete surprise waiting for us in the next year or two that this is unquestionably the best Kirk-death meditation in the entire franchise. So hey, that’s something worth noting. This bit with Sam and Peter Kirk, and Spock, who has mind-melded with the Captain in a last-ditch effort to save him, really chokes me up.

Spoiler alert! The renegade captain is actually Garth of Izar, returned to his old shapeshifting ways and wreaking havoc on the Federation and eager to avenge himself on Captain Kirk. Starfleet sends Finnegan – yes, that Finnegan – first to investigate some of the damage we saw in issues 48-49 and then to meet up with the Enterprise, where Kirk learns he’s both grown up a bit and still something of the same old Finnegan. 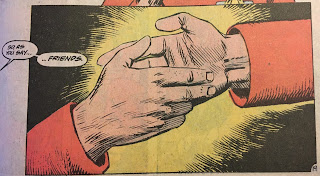 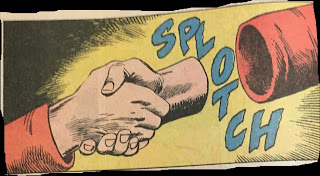 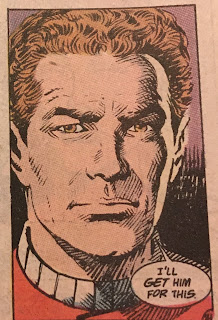 Except that’s not quite true. Hats off to Peter David for rehabilitating freaking Finnegan; the character here is pretty great. From the moment he appears, investigating the goings-on at Omicron Cetti IV and throughout the two issues, he comes across not as the annoying prankster from "Shore Leave" but more like The World's Most Interesting Man from the Dos Equis commercials. You get the sense that here's a guy who has seen and done it all.

And the above bit/ set-up comes back in a nice Chekov's Phaser fashion, as Kirk has rigged his door for this revenge gag but it ends up saving his life as Garth has taken Finnegan's form:

The best comes at the end, though, which was too much to try and screencap, but as Finnegan is leaving, he agrees to a no-hard-feelings-Kirk arm wrestling match which he appears to lose after a valiant struggle. After a little backslapping, everyone now friends, he's about to make his exit when Scotty says not so fast, you still have to arm wrestle me, too, you know, I've got more records than the Captain himself (there's all this arm-wrestling-at-the-Academy talk, you know how it goes). Finnegan says well sure, okay, sits down, and after one-two-three-go he immediately slams Scotty's arm to the table. Everyone is startled. Big grin then hey-whoah-look-at-the-time-must-go-toodle-oo-my-new-friends. 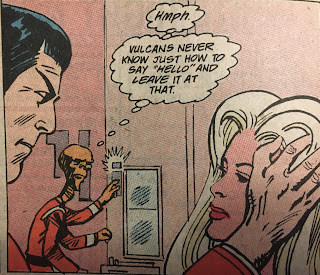 Good stuff. These three issues (the two-parter plus the Kirk's death meditation) are my favorite stuff of the series. I can't say enough about how the entire cast springs to life under his watch; there's no other way to put it. What a damn shame they didn't tap him to write Generations.

As for Bearclaw’s trial, well right, it was Garth, not Bearclaw. Either way it's unfortunate it did not end with his death. 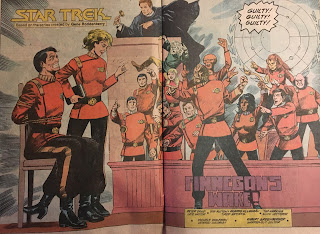 Given the proliferation of shapeshifters and illusionists in Starfleet alone, not just the Trekverse, not to mention the psycho tricorder and telepaths and whatever else, the standard legal set-up seems a little silly, doesn’t it? Nobody tell Samuel T. Cogley.

56. A mystic takes over the Enterprise to bring him and his followers to a planet where he promises death and healing. Bones reunites with an old flame (Tonia Barrows). Written by Martin Pasko and illustrated by Gray Morrow.

There is no indication that this is the end for the series - in fact the lettercol hints at a future issue 100 in November 1992 - but here we are. Too bad we didn’t get a proper farewell from the usual art team (and we should pause to consider practically the entire series was illustrated by a single art team, which is rare) or from Peter David. Gray Morrow and Marty Pasko are certainly legends in their own right, but this issue feels like filler. Especially after the last three. DC's Trek, v1, comes to an indifferent close. It will be relaunched one year after issue 56 with a longer run by Peter David. But that is a tale for another day, and another blog.

We'll return for one last Trek v1 post to look at Annual #3 and PAD's adaptation of Star Trek V. Until then here are the Leftover Screencaps from all the above. 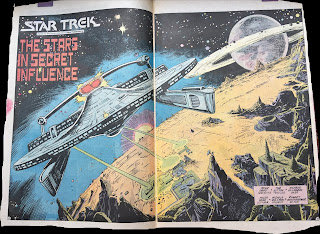 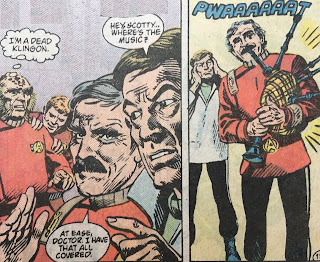 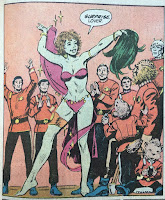 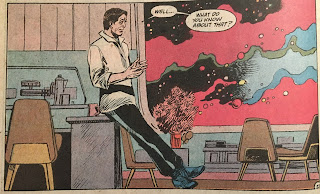 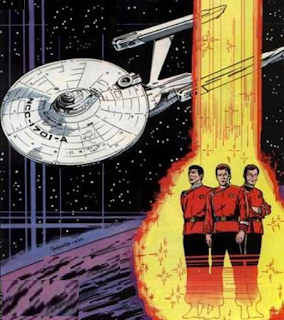 Until next time, friends and neighbors!
Posted by B McMolo at 8:26 AM