Wolverine had been Marvel's de facto most popular character for years, so giving him his own monthly title in 1988 was a no-brainer.

Unlike many of the other high-profile #1s of the era, it still commands a steep price on eBay. Equally unlikely, it's aged quite well. The uninitiated are encouraged to pick up the ESSENTIALS trade collecting the first two dozen or so issues - great fun. The X-Men were believed to be dead at the time, so Wolverine hides out on the fictional island of Madripoor, going by the name of "Patch."

Although I collected it at the time, it wasn't a favorite. Reading it again in 2014, I was highly entertained. It really is as Claremont described it at the time, "like Terry and the Pirates meets Conan." Madripoor is like a Southeast Asian Casablanca. It's a nice counterpoint to the X-stories of the time.

Of course, it helps that the first artist on the book was John Buscema. 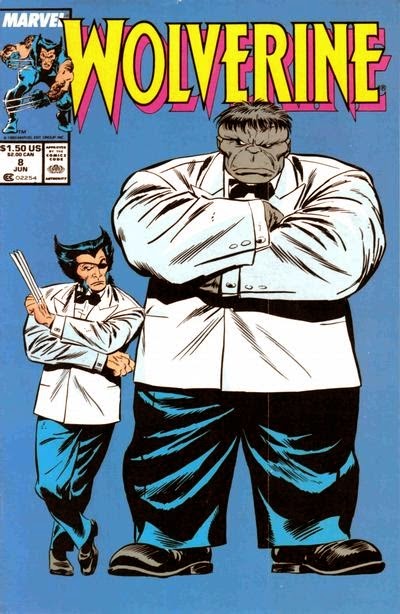 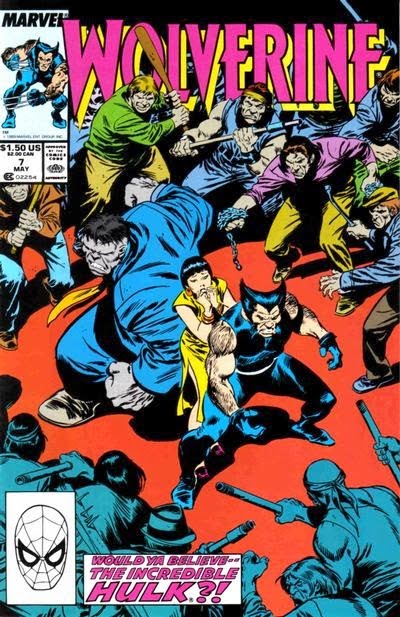 The usual anecdote one hears about Buscema is that when his pages came into the Bullpen, everyone would gather round to turn the pages over and admire the "warm-up" doodles that covered the margins. These were usually things on television at the time, street scenes, random faces, etc. (You can see some of them here or at the link above the pics.) Buscema made his mark on Avengers and elsewhere, but he grew to hate drawing superheroes, preferring his work with Roy Thomas on Conan. So Wolverine was sort of a best-of-both-worlds scenario for Buscema fans.

It's actually kind of cool that Marvel gave Wolverine to John Buscema. I'm sure every artist was chomping at the bit to get onboard such a guaranteed royalty monthly cash cow. This was back when Marvel paid fat royalties for comics that sold over 100,000 copies a month, and anything X-verse was guaranteed to bring in three times that.

Part of me wonders if this wasn't a "Let's funnel some money Big John's way lest he get any ideas..." on Marvel's part. Hush-up money, in other words. Artists like Buscema or Romita, Sr. provided so much of the illustration content for all Marvel licensing in the 70s, and whether or not they were owed any monies was a big issue in the late 80s. (And remains one today.) I honestly don't know. I've read a bunch of Buscema interviews, but they always seem to boil down to his crossing his arms and answering every question with "I don't remember" or "I really don't give a damn, to be honest."

He was by all accounts a reticent interviewee. Also? Undoubtedly one of comicdom's major talents. (His granddaughter Stephanie is doing some great work, as well. Whatever this style is called - I always think "Powerpuff Girl" but "Cartoony Vintage Retro" or whatever; ye animation scholars feel free to educate me - I like it.) He inked a lot of his own pencils on Wolverine, but on a few issues he was inked by none other than Bill Sienkiewicz: I love Sienkiewicz, but I'm not the biggest fan of their collaboration. I prefer John Buscema as inked by John Buscema. (Or Tom Palmer.)

Buscema left the title fairly quickly (and died far too soon after that) but Wolverine went on for many years. I stopped collecting shortly after the fantastic Archie Goodwin / John Byrne / Klaus Janson run (issues 17 through 24.)


It wasn't just Wolverine. I stopped collecting Marvel altogether around the time this came out: This stands out to me as the moment when Marvel changed for me, for the worse. I'm older now and see it was really the end of "my" era and the beginning of something new, i.e first the Image era (embodied in the cover by Jim Lee) and then all-points-beyond. But what I reacted to most particularly at the time was a line-wide revisionism creeping in. At the same time X-Men 268 was coming out, Iron Man's origin was radically changed over in Iron Man, and other such things. I'll get into this more when I cover Earth X (a mini-series from the 1990s that serves as sort of a Ragnarok for Marvel's Copper Age,) but Marvel's continuity from 1960 to 1990 was pretty solid. This was the sweet spot of Marvel mythos, comparable to America's first bridge-and-highway infrastructure, all gleaming and modern, accessible, intelligently interconnected, user-friendly, and wondrous.

I wasn't sympathetic at the time to the idea that such infrastructure requires periodic adjustment and renovation and sometimes demolition. I get it now, but in 1990, I felt like "my" Marvel was being betrayed. Suddenly, the infrastructure I'd carefully and enthusiastically invested in was all rebootable. Marvel was becoming (and became) post-Crisis DC, in other words, when the terms and conditions of any and all stories and origins were subject to change by the management without prior notice. (And at great financial cost to the consumer.) "Event" storytelling and agonizingly tedious "decompression" became the order of the day. I quit comics with all the huff and ridiculousness of a 17 year old boy telling the spinner rack it wasn't going to have ol' McMolo to kick around anymore.

I came back later, of course (like I need to tell you that... this blog has become a straight-up comics confessional!) but outside of a few things here and there, I never really came back to Marvel as a regular reader/ collector. It's like metal. I'm forever interested in the metal and Marvel I grew up with (which in Marvel's case, due to its intricate continuity, extends back to the early 60s) but not so much in anything after the early 90s or so.

Anyway, back to Wolverine. What bugged me about X-Men 268 is hard to explain in retrospect, but it was the sudden "Oh, now Wolverine was hanging around with Captain America and Baron Strucker in World War 2?"ness of it all. I'm not exactly sure why this was the straw that broke the camel's back for me, but it was.

Later, I think Marvel did a pretty bang-up job putting together a proper origin story for Wolverine: 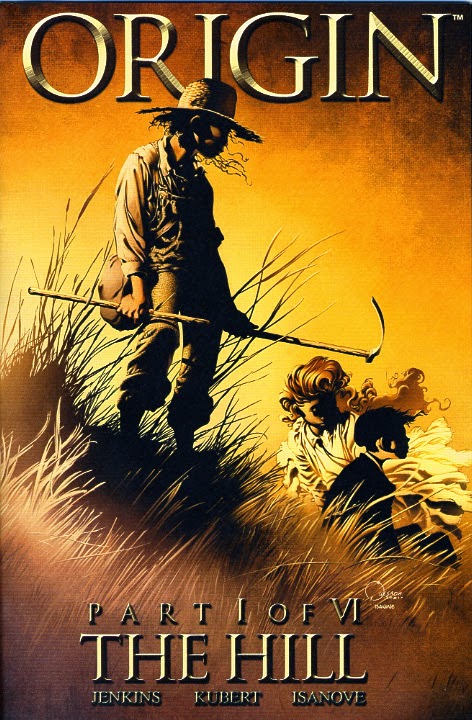 I'm not the biggest Andy Kubert fan. I have enjoyed his work at times, but in reviewing Origin for this blog, I think the weakest point is the art. The story is fantastic - very cinematic, very well put-together, very sensible for the Logan I knew growing up. I thought this was a touching story and is incredibly underrated.

The first Wolverine movie attempted to draw on the backstory created both in Origin and X-Men 268, and the operation was not a success. Patient died on operating table, even with super healing factor. It's my understanding that the second Wolverine movie - which I haven't seen - drew more on the first Wolverine mini-series from the early 80s, written by Claremont and drawn by our old friend Frank Miller. 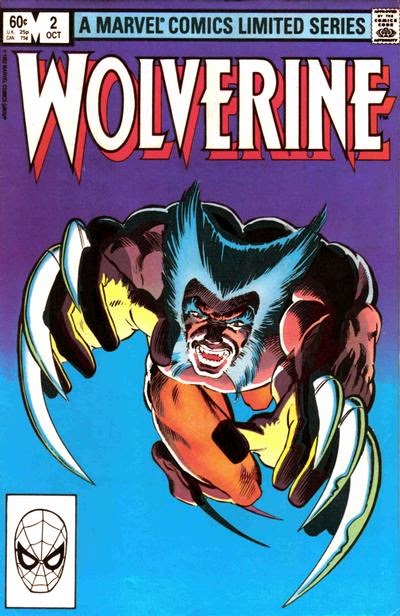 This is where, according to John Byrne, Miller went off-model and "cast" Clint Eastwood as Wolverine. It's also where Wolverine got the samurai / Far East side of his origin story. 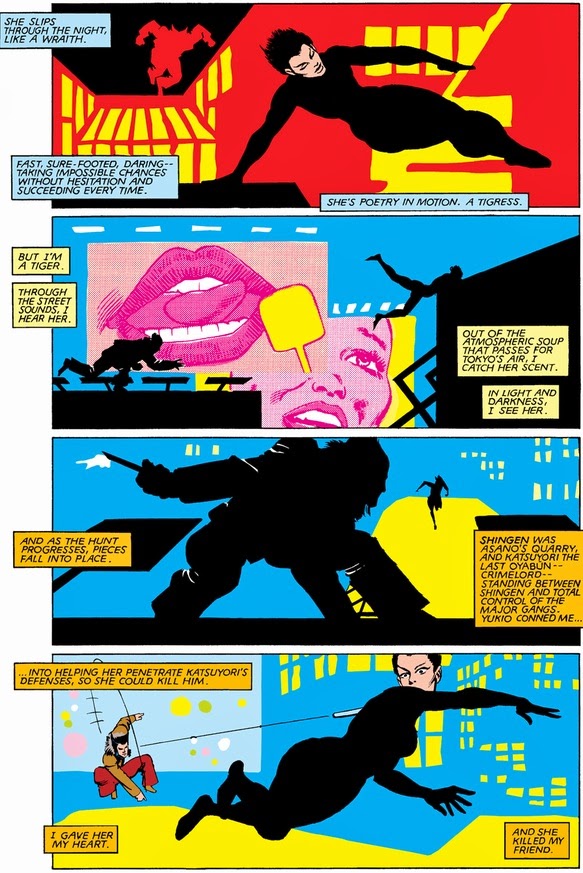 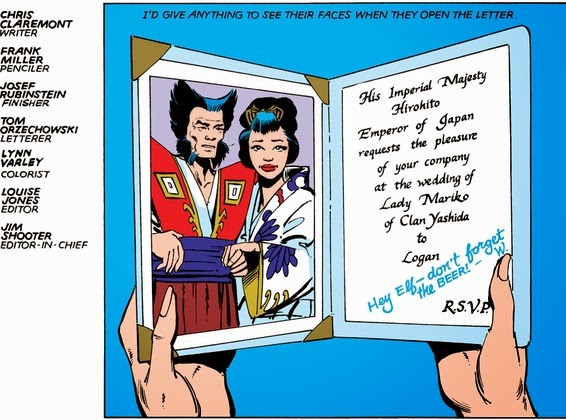 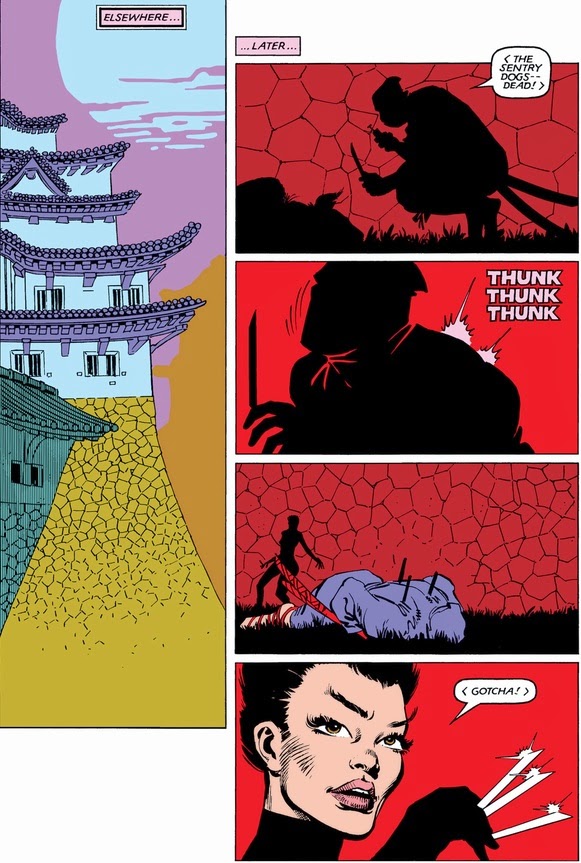 Having just revisited Miller's run on Daredevil, I was happy to discover (re-discover, I guess; I'd read this before but not since the 80s) The Hand playing a big role in the proceedings. 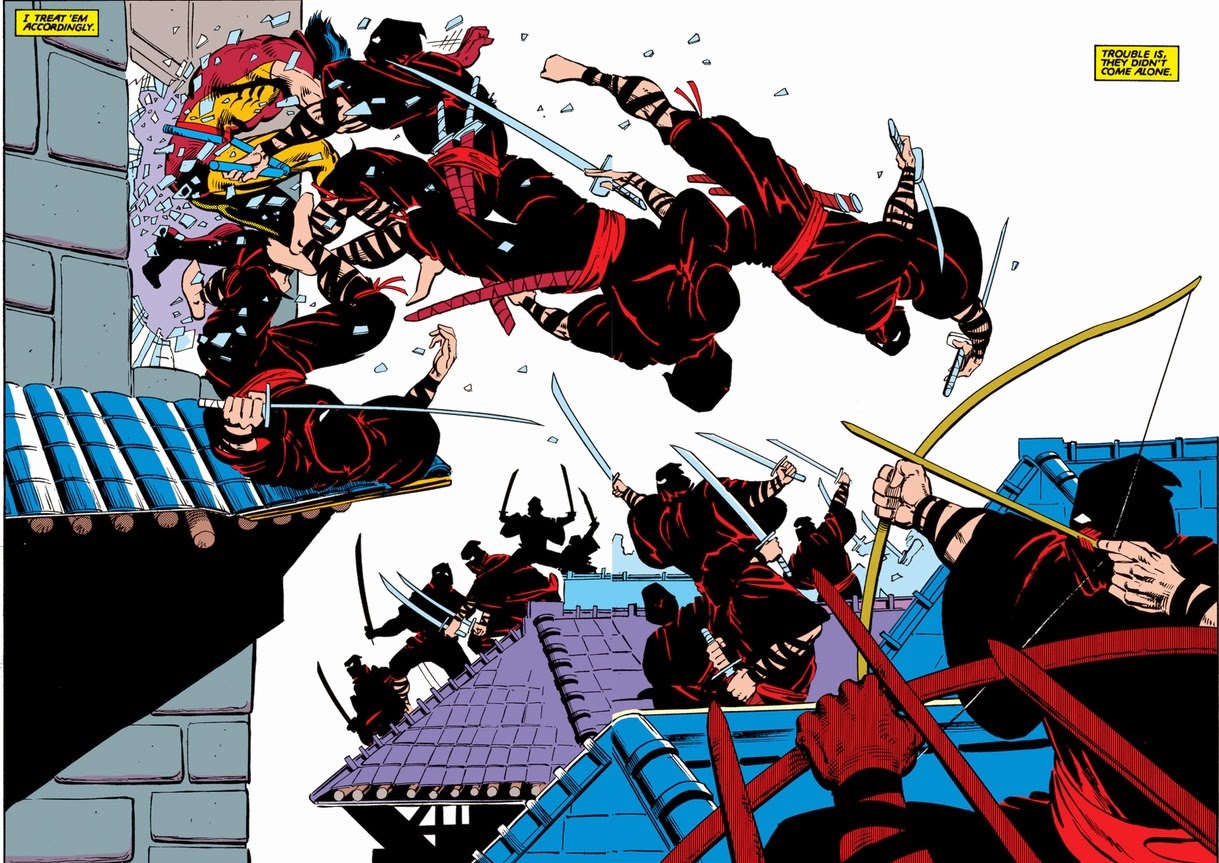 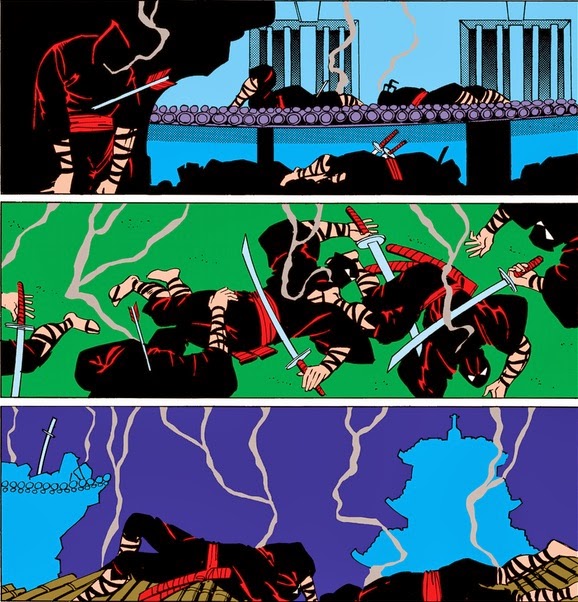 Of the many mini-series that Marvel cranked out in the 80s (several of which also delved into Wolverine's Far East backstory, such as Kitty Pryde and Wolverine as just one example) Wolverine and perhaps the Grant/ Zeck The Punisher had the most "buzz." A big question when the 1988 Claremont/ Buscema series came out was, "Can it be possibly be better than the Claremont/ Miller mini-series?" Like it was a peak never to be reached again.

It's still fun reading, but to 2014 eyes, it's similar enough in tone and design to Miller's Daredevil to almost be derivative. Almost, but not quite: still a highlight of 80s Marvel, to be sure.

A few years after Wolverine got his monthly series, Barry Windsor-Smith wrote and illustrated a 13-chapter story arc entitled "Weapon X" for Marvel Comics Presents (issues 72-84.) This was another big deal in the comics world at the time. It was also notable because Barry Windsor-Smith was the other big-time Conan artist, whose run on the title is still highly cherished by fans. (And considered overrated by others.)

I was familiar with BWS more from this: 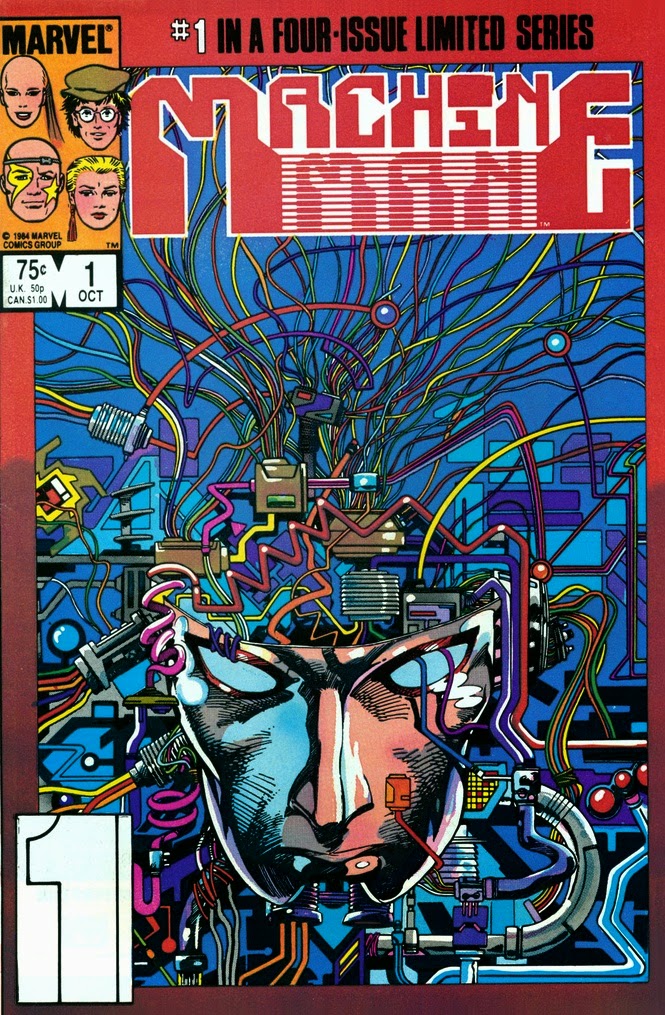 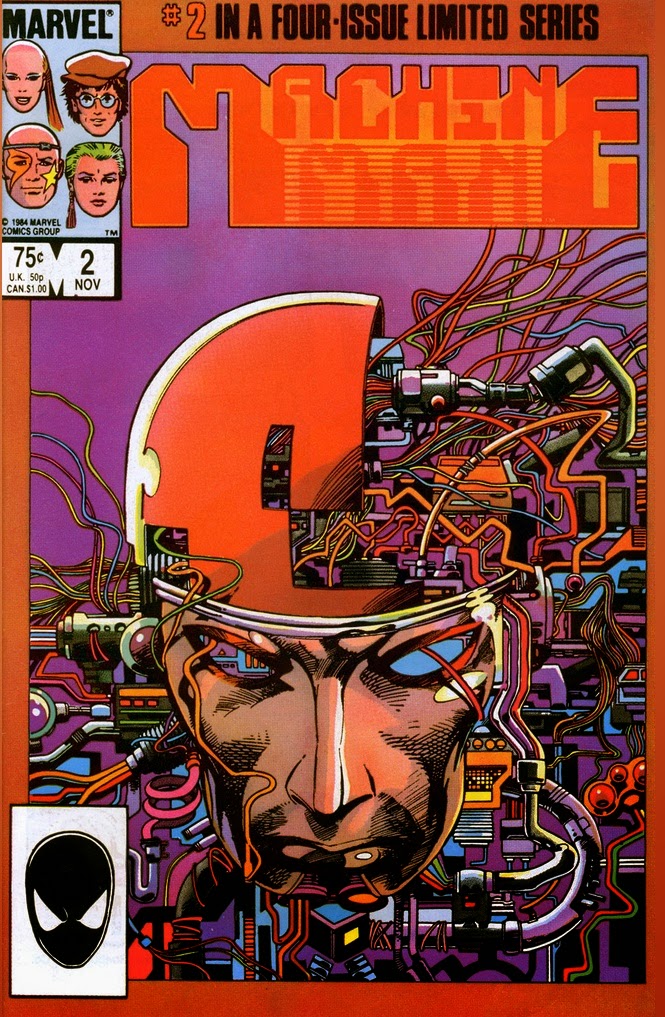 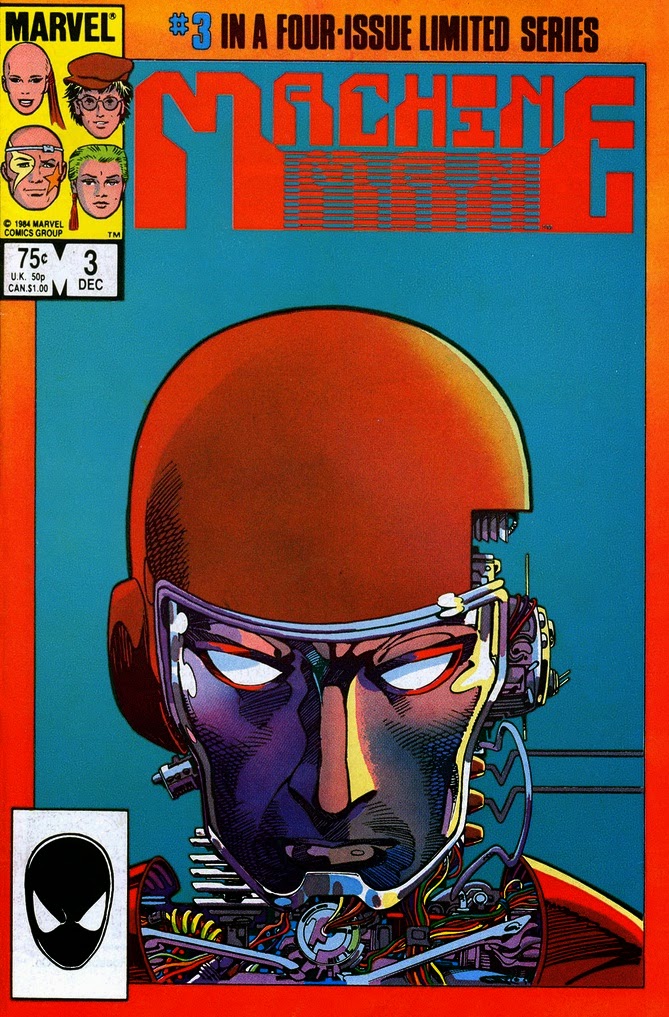 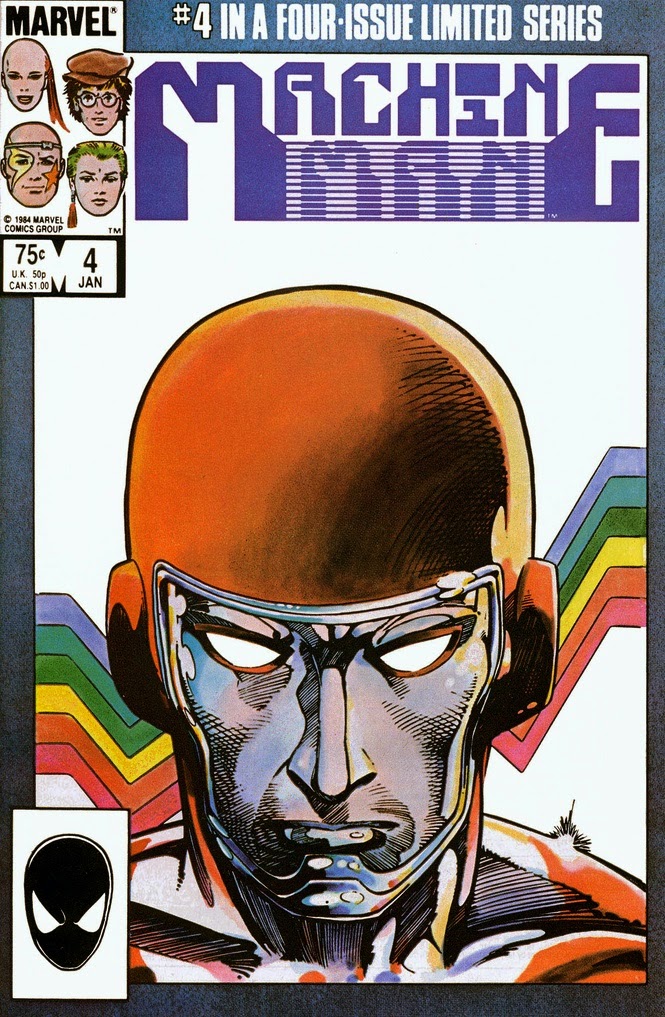 I don't think this was an especially popular mini-series, but for some reason, it (and another from the same year, Starriors) really appealed to me.

I must have read both a dozen times apiece in 1986 alone. Just loved them. I still think they'd make fantastic movies. If the Machine Man limited series is remembered at all these days, it's probably for introducing Arno Stark, aka But I digress. BWS had done a few covers and some sporadic work in the X-verse, but the pivotal cover to remember is this one: 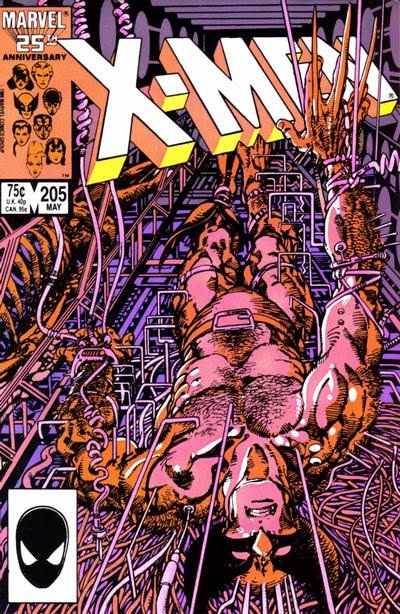 As the "Weapon X" storyline is basically this cover, stretched over 13 issues. Oh, it added an evil Nazi-esque doctor who keeps saying "You idiots!" to everyone around him, and plenty of shots of naked Logan slicing shit up, but there's nothing we learn about Logan's transformation into Weapon X (i.e. when the Canadian government grafted adamantium to his bones to turn him into their super-spy killing machine) that isn't visually communicated by that cover. 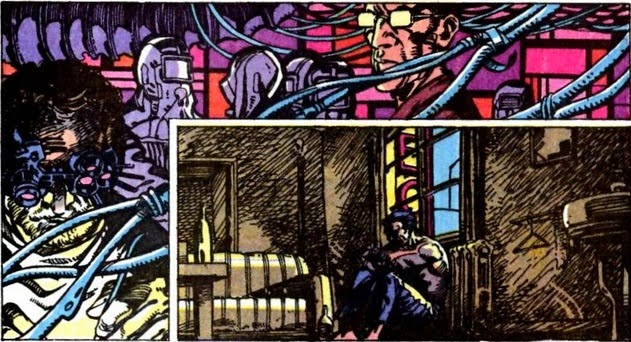 I didn't consider it all that compelling at the time (although the art is certainly something to look at - and here's a very interesting read concerning how old art, particularly Barry Windsor-Smith's, is altered fundamentally by new coloring processes) but it certainly captured the sort of fetish for blood and angst - particularly of the Wolverine/ mutant variety - that animated the Marvel universe of the era. 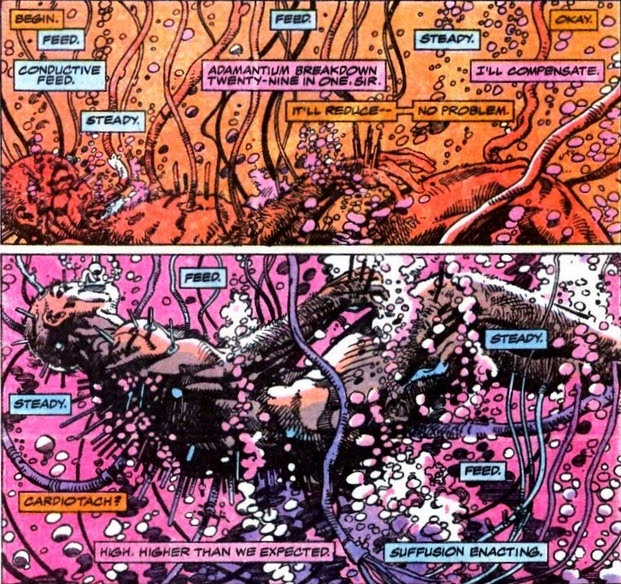 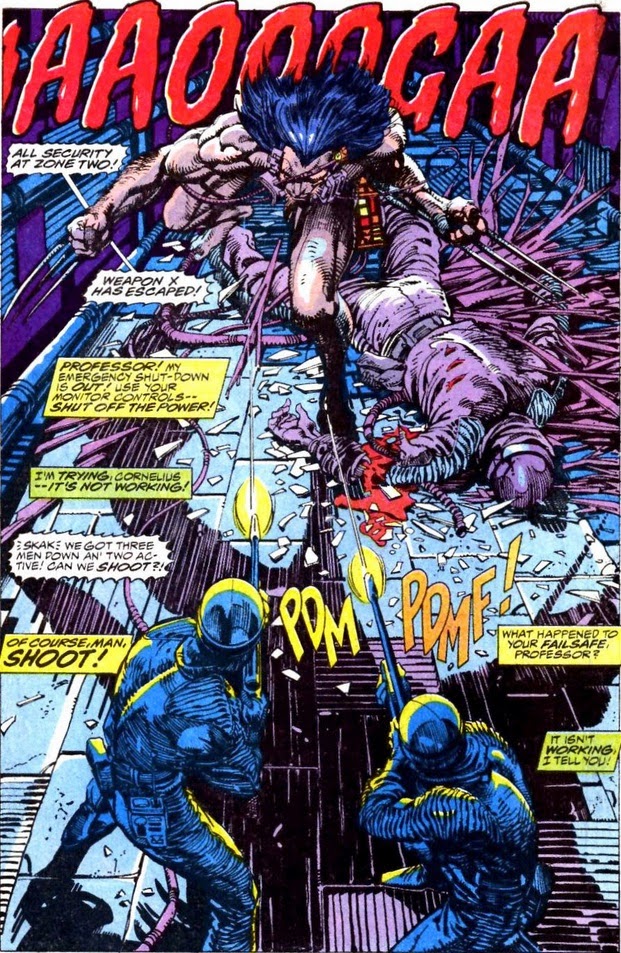 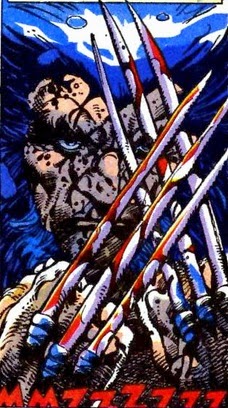 I mean, the story's not terrible, and the art is commendable. I'm not sure exactly what happened to BWS. He went off-grid, as they say. He suffers from that McFarlane (or even Kirby - hersey to some, but come on, now) syndrome in that everything he draws tends to look the same, but I'm not knocking the guy for it. 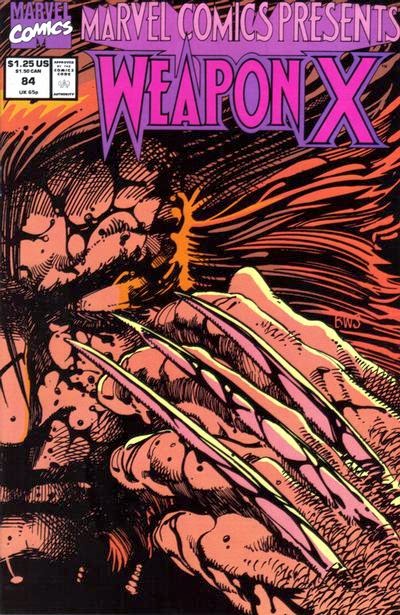 These were the big non-X-Men Wolverine moments of my Marvel era. Obviously, the character continued to evolve (and even got an Australian accent for the animated series - not sure how that one came about! But it's amusing to consider the character was brought to life on the big screen by an Australian actor, sans accent, in the years to come) after I stopped reading, so someone else's overview would look very different.
Posted by B McMolo at 11:14 AM